The History of Walsingham 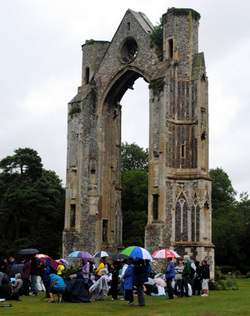 Back in the 12th century Walsingham was one of the four main shrines in Christendom.  It was as famous as Rome, Jerusalem and St James of Compostella, pilgrims flocked in their thousands here, and it became the foremost Marian shrine in the world at that time.

England was known as Mary’s Dowry, and Walsingham was its Little Nazareth.  Here, in 1061, five years before the Norman conquest and during the reign of St Edward, Our Lady appeared to Richeldis de Faverches, a devout Norman widow.  In a vision she showed her the house where the Annunciation had taken place and where the Holy Family had lived.  Richeldis was then requested to build a similar house at Walsingham and was promised: “All who are in any way distressed, or in need, let them seek me there in that little house you have made at Walsingham.  To all that seek me there shall be given succour.  And there at Walsingham in this little house shall be held in remembrance the great joy of my salutation when St Gabriel told me I should through humility become the mother of God’s Son.”

As pilgrims began to flock to Walsingham, Geofirey de Favourites, Richeldis’ son, had a priory and a church built.  It’s running was then given to the Augustinian Canons.  The shrine flourished and became very rich. So many pilgrims in fact came that the route from London to Walsingham (which passed through Newmarket, Brandon, Fakenham and via Barsham and Houghton) became known as the Walsingham Way.  They used to say that the Milky Way pointed to Walsingham and guided pilgrims there.

Edward I had a particular devotion to Our Lady of Walsingham.  He believed she had saved him from a fatal accident as a young man, and he visited the shrine 13 times.  In fact every English monarch from Henry II until the Reformation is known to have paid at least one visit to Walsingham.  This even included Henry VIII who was responsible for its eventual destruction.  As a young man, however, he walked barefoot in pilgrimage all the way from Barsham.  Erasmus, the great philosopher and theologian came too and recorded his impressions.  It seems he was particularly impressed with the shrine’s treasures and relics, though things such as a phial of the virgin’s milk and the joint of St Peter’s finger sounds rather bizarre to the modern ear. 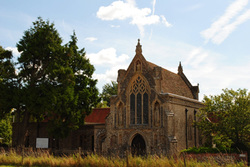 The great wealth of Walsingham, however, and the worldliness of its clergy made it a prime target in the Reformation.  Although the Augustinian Canons signed the Act of Supremacy acknowledging Henry VIII as the head of the Church, the days of the shrine were numbered.  In 1538 the priory and all its buildings were sold and the famous statue of Our Lady of Walsingham was taken to London to be burnt.

Although devotion to Our Lady of Walsingham was outlawed, over the centuries a few pilgrims did continue to come in secret.  At the end of the 19th century, Charlotte Boyd an Anglican convert, bought the disused 14th century Slipper Chapel, where in the old days pilgrims had stopped to remove their shoes so they could walk the final mile to the shrine barefoot.  She restored the chapel and donated it to the Benedictines of Downsidc They eventually handed it over to the diocese and on August 19th, 1934, the first public Mass was celebrated there.  This was a spectacular ceremony presided over by Cardinal Bourne and most of the hierarchy, with 13,000 people, when the chapel was formally consecrated as the National Catholic Shrine to Our Lady.

Since then, particularly in the summer months, many parishes and diocesan groups go on pilgrimage in cars and coaches, and walk from the village down the Penitents’ Mile to the Slipper chapel.  To accommodate the growing numbers The Chapel of Reconciliation made of red brick and flint like a typical Norfolk barn was built some years ago.

In 1922 the local Anglican vicar, Rev Alfred Hope-Pattern, who had a devotion to Our Lady and was fascinated by Walsingham’s past, rebuilt a replica of the original Holy House in the village.  Here people come to pray and drink water from the holy well and ever night at 6 o’clock petitions and prayers are offered from people all over the world.